I am very lucky to have gathered some great staff and true animal lovers at SwissRidge Kennels. There is no way I could produce so many happy, healthy, well-socialized pups without the support of many capable people. I know that my dogs and my business are in good hands. Please meet them, through their own words, below. 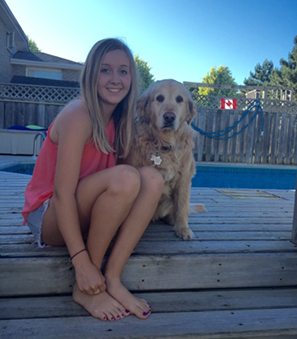 I have been working as a Kennel Attendant at SwissRidge since January 2016.

For as long as I can remember, animals have always been my passion. When I’m not taking care of the dogs at SwissRidge, you can usually find me at home with my own dog, at the farm riding and taking care of the horses, or at the gym working on my fitness.

The unconditional love that I receive from the dogs makes me really appreciate the job that I have at SwissRidge. I love coming to work every day knowing that there are many wagging tails waiting for me to arrive.

My favorite part of the job, besides being with dogs all day, would be getting the Bernedoodle puppies ready to go home on puppy pick-up day. I love seeing how fluffy they get after being bathed and brushed… especially their paws and tails.

It’s a pleasure to work for Sherry, someone who is so knowledgeable about breeding and caring for dogs. In the short amount of time I have worked for Sherry, I have already learned so much!

My love for animals makes this the perfect job for me! 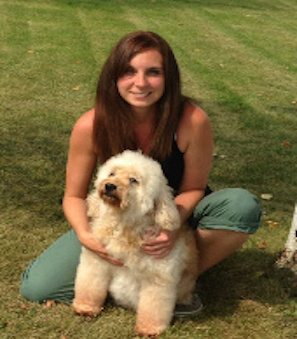 I provide administrative support at SwissRidge Kennels. My job includes answering phone calls and emails, booking flights, organizing all paperwork, booking appointments and making sure all clients’ needs are covered from the day they contact us until they get their pup and afterwards.

I’ve held other customer service/receptionist jobs in the past, but none has been as fulfilling as this one. The best part of my job is interacting with future and existing members of our SwissRidge family. I love helping families find their newest furry friend.

Working for a committed professional like Sherry, and being around cute pups and beautiful dogs top off my list of why I enjoy my job.

I have had dogs most of my life, and there’s nothing like the love and companionship of man’s best friend. 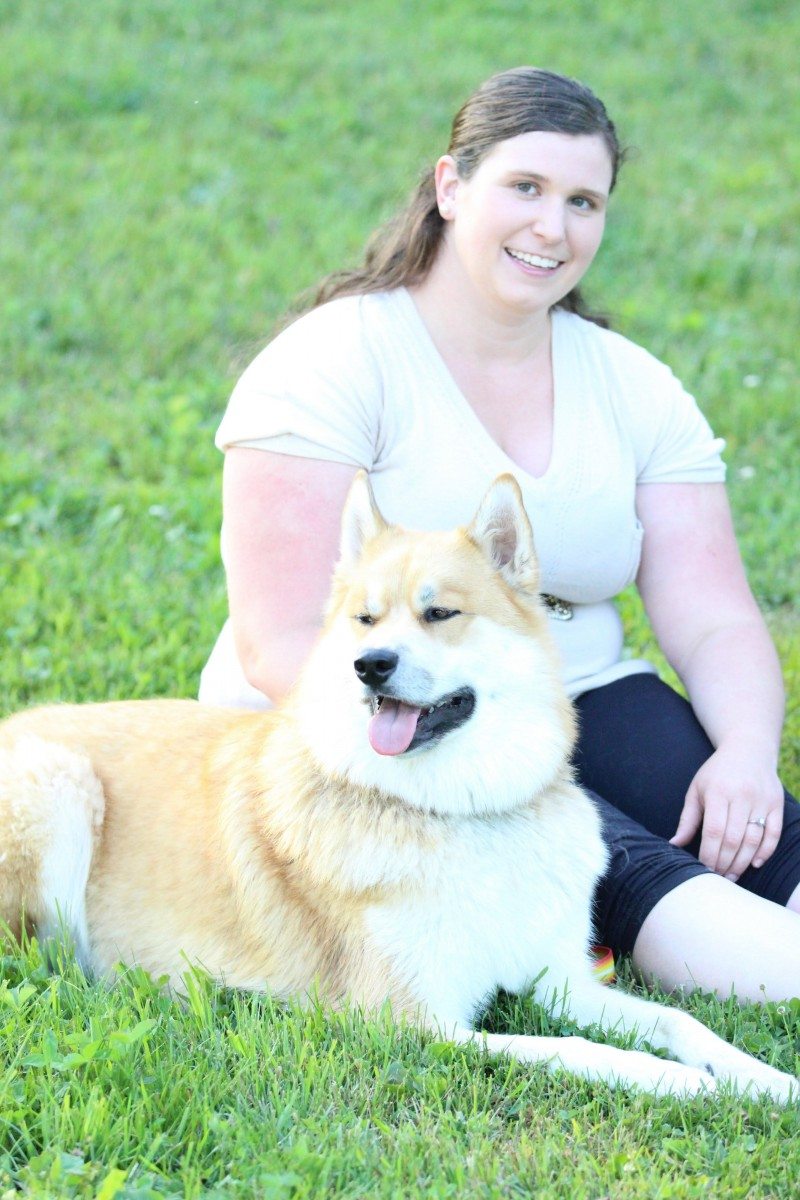 I’m in charge of getting all the training reports and updates to owners who have enrolled their puppies in our imprint program.

I have a long history of loving animals, my two passions are horses and dogs. I am so proud to be a part of SwissRidge Kennels! I have a few furry friends at home, pictured is my rescue Joey. I also have an Australian Shepherd, a SwissRidge Golden Retriever, two horses, and cows. I enjoy going on hikes with my dogs and giving them lots of love, and it’s pretty incredible that my job is to simply care for and love someone else’s. A lot of time is spent keeping their kennels clean and cozy, while the rest of the time is spent romping around with all the doodles and their parents. I love it! My favorite part is meeting the puppies’ new parents and watching how appreciated and involved our dogs are in their new furever families. 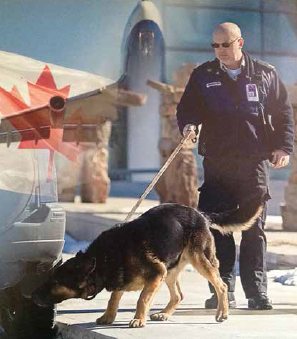 Guy is a retired Toronto police officer who was a member of the Police Dog Services (K9 unit) for several years. He had been working with a general purpose police dog until the tragedy of 9/11 in New York City.  Guy and his K9 partner, Taz, were selected and sent for specialized training in Explosive Detection. As a result, Guy was the first member of the Toronto Police Service to have a police dog who was trained in both General Purpose work and Explosive Detection work.

Guy and his K9 partner were then used to protect many dignitaries over the years, such as members of the British royal family, Pope John Paul II, a U.S. president, Canada’s prime minister, and many other celebrities. They were also tasked with investigating bomb threats and searching for firearms.

After retiring from the Toronto Police, Guy was hired by the Greater Toronto Airports Authority Explosive Detection K9 Unit at Toronto Pearson Airport. Over the next 12 years, Guy worked with and trained a number of dogs, specializing in Explosive Detection and Obedience. He was responsible for training and assisting team members daily.

Guy and his K9 partners attended the K9 Training Center of the U.S. Bureau of Alcohol, Tobacco, Firearms and Explosives, the International Police Work Dog Association, and the International Association of Bomb Technicians and Investigators K9 Group, and were certified on every occasion. Guy and his K9s have been guests on the radio station Q107 on Derringer in the Morning. He was also involved in K9 Cards for Kids, which raised money for the Toronto Hospital for Sick Children.

After retiring in 2015, Guy, because of his love for dogs and training, started his own venture “The Tracking Guy.” In December of 2015, Guy joined SwissRidge as a Puppy Imprinter.  And in May of 2016 he was hired on as a trainer for SwissRidge. He is now training the kennel dogs in basic obedience. 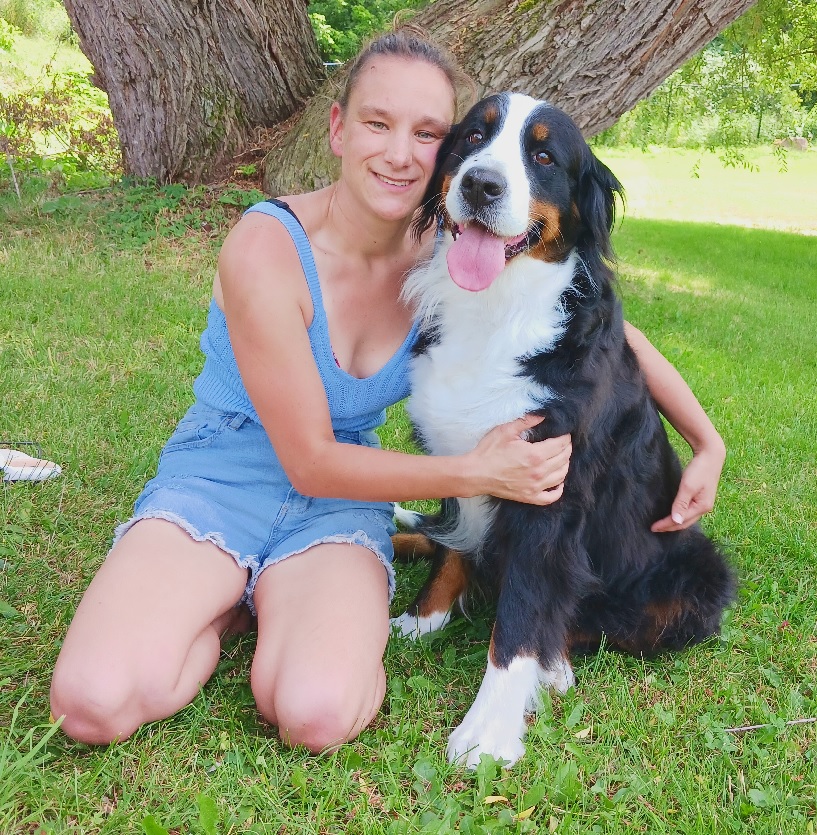 Hi my name is Kat I joined Swissridge kennels in Feb. 2022.

I have 6 years of dog grooming experience and I thoroughly enjoy grooming all the beautiful dogs at Swissridge. I have always had a passion for dogs and how they show you unconditional love. When I’m not at work, making the dogs look and feel there best I’m at home with my own dog Kelly, playing fetching and going for longs hikes. I love coming into the kennel in the mornings and seeing all the wagging tails and smiles of the dogs and older puppies. I also enjoying getting the puppies ready to go to their forever homes and making them look like superstar’s! 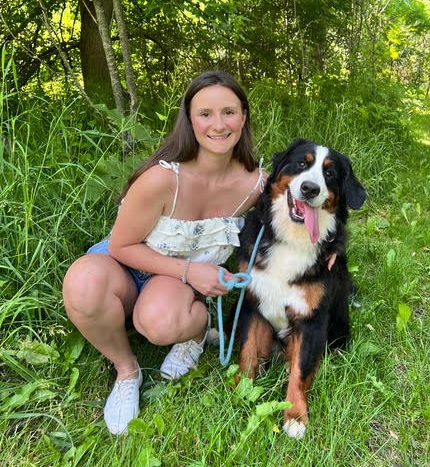 I joined SwissRidge kennels in 2019  and it’s been a blast! I’ve learned so much about caring for dogs and their puppies. I am so grateful for the opportunities here. I am currently working the overnight shift whelping puppies; as well as training puppies in the SwissRidge Imprinting program. Being a trainer is such a rewarding job. I get to see puppies grow and develop into the perfect fur-friend for their forever family, knowing how much joy they’ll bring. It is wonderful being the one to welcome them into the world, watch them develop and respond to training.

My love of animals began as a child. I began riding horses at the age of 9, and have had my own horse since age 15.  At home I also have a dog of my own who is 9 and a Siamese cat who is 18. 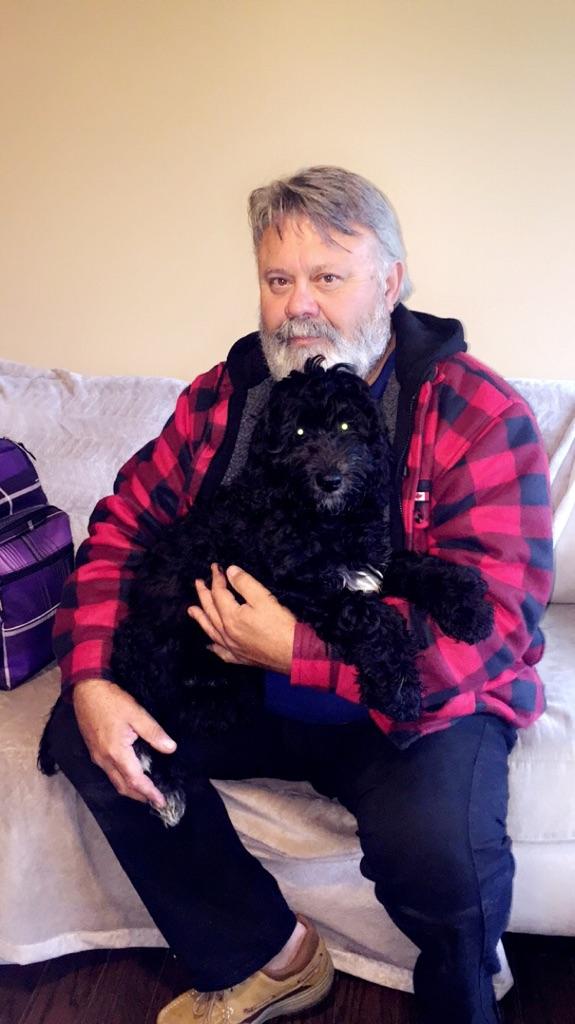 I have been working at SwissRidge kennels as the dogs personal chauffeur since 2016. I deliver pups to the airport. I guess you would say I’m the last guy they see before they fly to their new families. I also take them to and from vet appointments or anywhere they may need to go. I also do yard maintenance and other maintenance around the property.

I’ve been working here long enough to get to know all the girls and they are Angels from Heaven. It isn’t always the most glamorous job but they go about their job with so much love and care for every dog. We all truly love these dog and treat them as if they where our own. 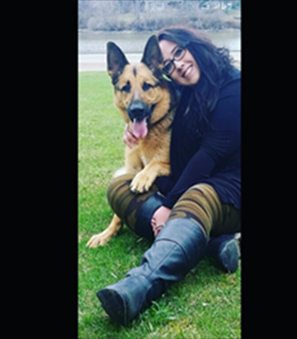 I have always been a lifelong animal lover, especially dogs! I graduated from Georgian College’s Animal Care Worker program as well as the Animal Enforcement program.

Now, I am part of the fabulous SwissRidge team in Schomberg! The standards are high at SwissRidge and I work hard to make sure all the dogs and puppies have tons of care, cleanliness and lots and lots of love!!! I enjoy working with these awesome dogs and the great team here so much, that it almost doesn’t feel like work at all!

When I’m not at work, I enjoy hanging around with my own two dogs, Sam and Tyson, and two cats, Tim and Reggie.  🙂

Ever since I was young animals have always been a big part of my life, from family pets to horseback riding I always knew I wanted to pursue a career working around animals. Since working at SwissRidge Kennels I have gained so much  valuable experience to help me in the future. This position has made me sure I want to work around animals. I love working with all the dogs and seeing these amazing puppies go to there fur ever homes! 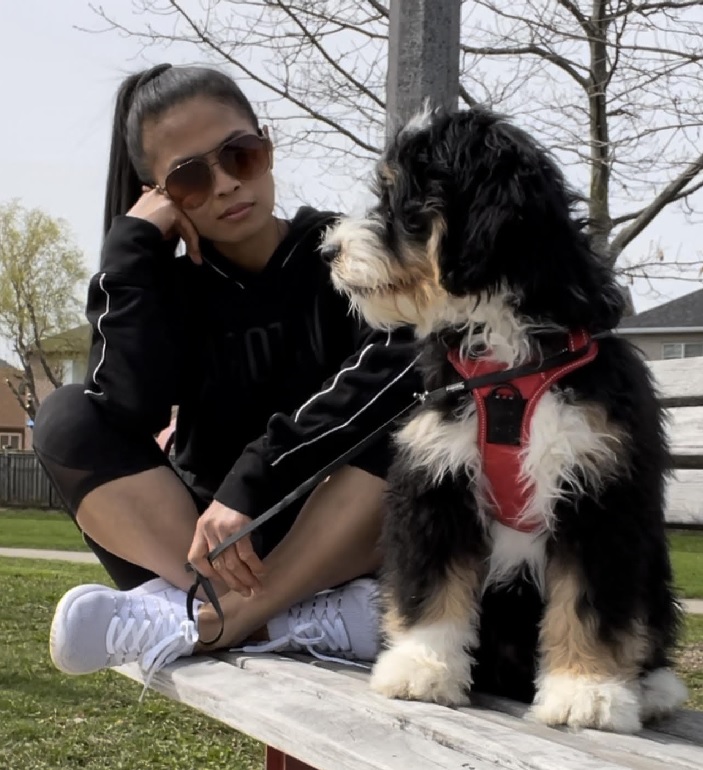 I’m Nina.
I was born and raised in Indonesia. I have traveled all over the world before settling in Canada. Before working with animals, I was a chef. My love for animals started to grow when I received my first SwissRidge dog who I named Bima.
I then had the opportunity to work at SwissRidge kennels. I have a very versatile job at SwissRidge. I mainly work in the nursery looking after all the moms and puppies. I also train puppies in the imprint program and look after some of the other farm animals on the property. I absolutely love my job and love that I get to spend every hour working with animals! 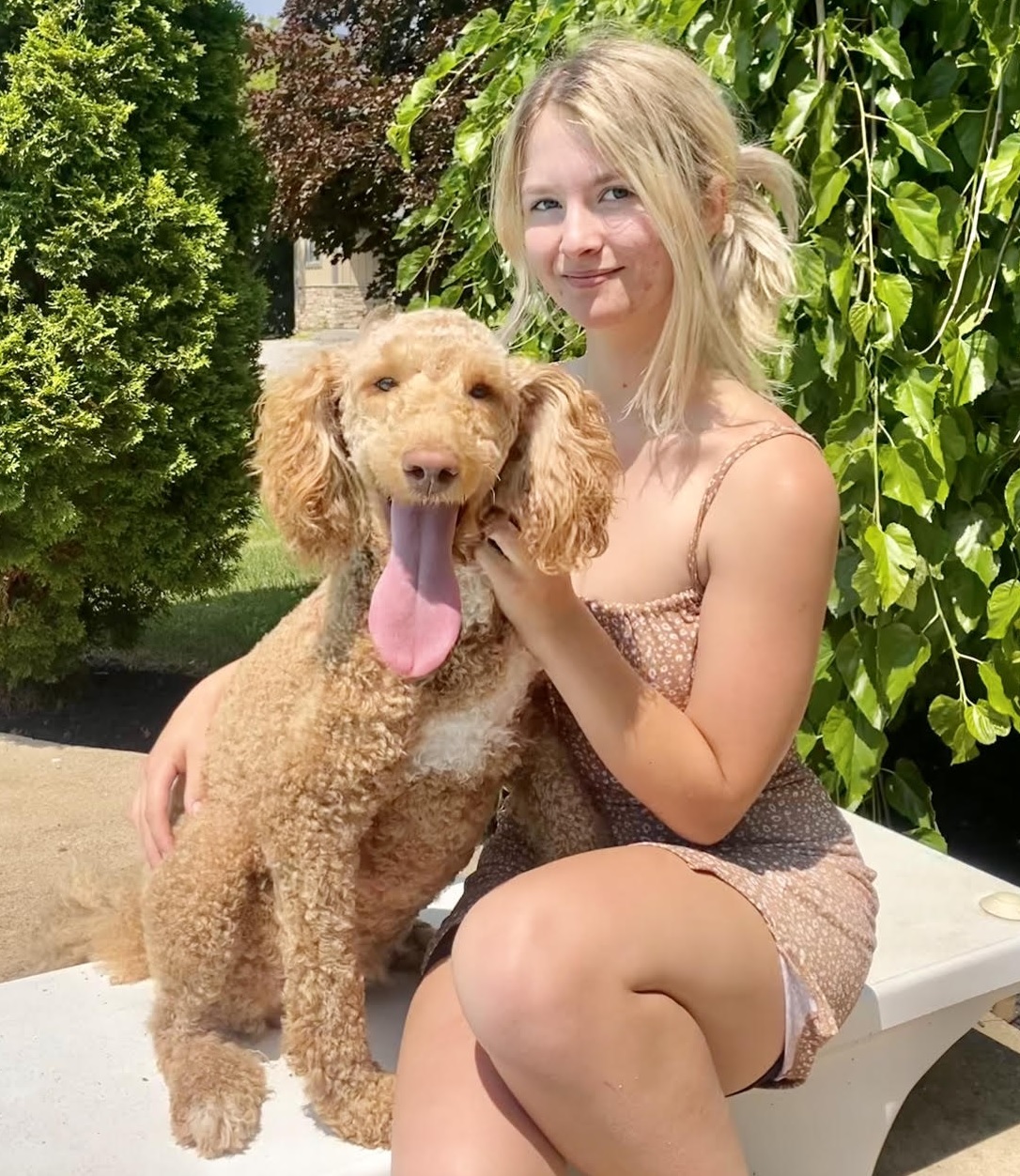 I’m Leija! I’ve been apart of the Swissridge team since 2020. I have always been around animals my entire life. I just love them. When I was younger, I always knew I wanted to work with dogs and now I do. It’s a dream come true. I love working with all the dogs and puppies at Swissridge it’s such a lovely environment. 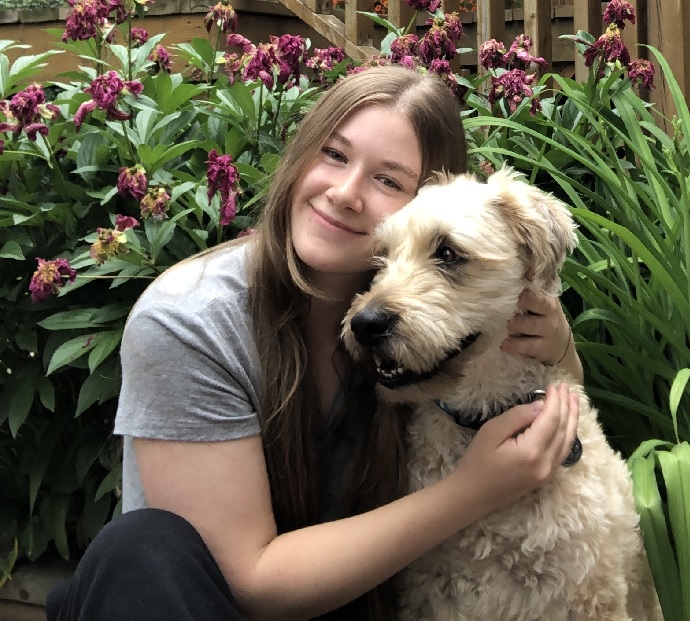 I grew up loving animals of all kinds, mainly dogs, so it has always been clear to me that I would want to work with, and around them.
Now that I have had experience working at SwissRidge, I am certain that I want to further my education surrounding them.
Working with these dogs is very fulfilling, and they have taught me more than I could imagine.
Outside of work, I love spending time with my dog Hunter! 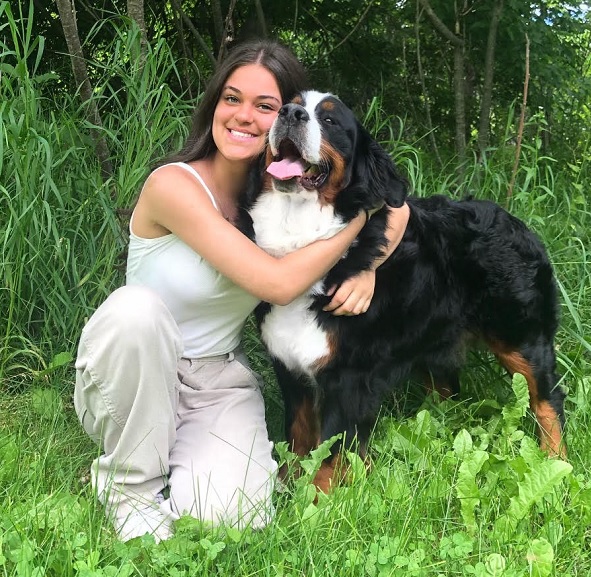 I am currently in my third year of Animal Biology at the University of Guelph, hoping to soon apply to Veterinary school. My love for animals started from a very young age and my dream has always been to work with them someday. When I first started working here, I immediately fell in love with not only the dogs, but the job itself. Working at SwissRidge Kennels has been such an amazing experience because I have learned so many things, as well as created so many bonds with the dogs and staff. It is such an awesome feeling knowing that I get to care for the dogs and their pups before they get sent off to their new family! 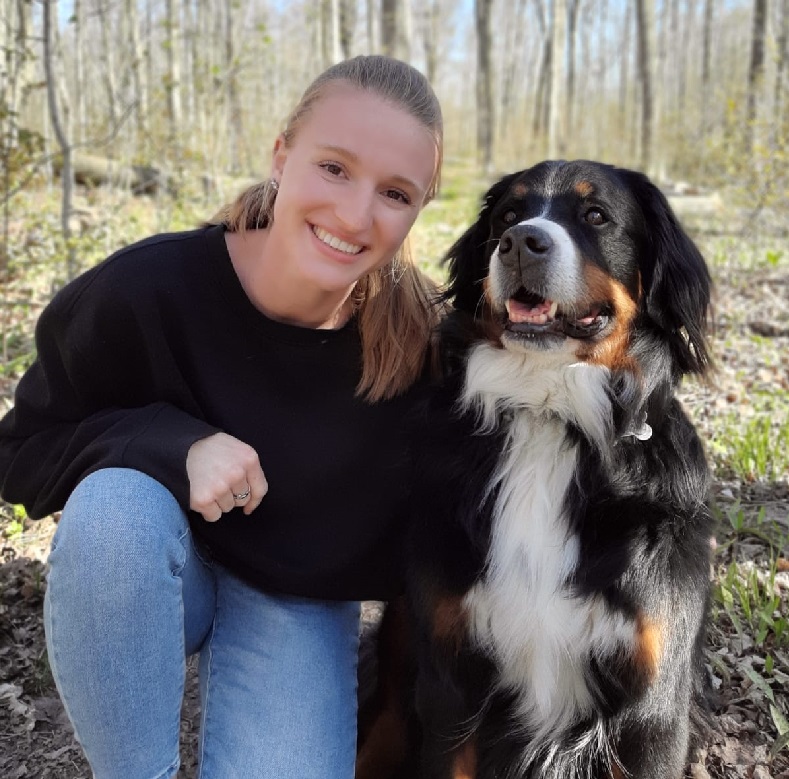 I graduated from Northern College with 2 certificates, one for Veterinary Assistant and the other for Animal Grooming.

I have loved animals all my life, especially dogs, and that is why I decided I wanted to work with them. Being able to show my love to dogs at SwissRidge is my favorite part of the job. Cuddling a dog never gets boring.