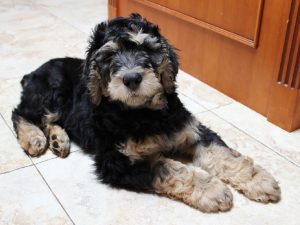 “Beau is an extremely loving, loyal, and intelligent pup. At two and a half months, he stopped having accidents around the house and now at four months, he’s mastered sit, high five, speak, down, ‘bang,’ and ‘touch your nose.’ When he’s home alone, we let him roam freely and he has yet to destroy anything. He loves everyone and is never aggressive. He also loves cuddles! Whenever someone sits on the floor he’ll sit in their lap like he’s a tiny puppy, when in reality he’s over 40 lbs. We bring him to off-leash trails and if he’s in front of us, he always stops to check that we are still there. Sometimes we hide when he goes too far ahead, but he always turns back and finds us. He never goes deep into the forest, and if there is another dog there he never runs towards it. Whenever we take him out he gets complimented not just on his beautiful coat, but also his temperament. He is super goofy and wild, but will be calm when he needs to be. When we go out and have a conversation with someone he will sit quietly and wait. We were definitely skeptical about having Sherry pick out our puppy for us, but he truly is the perfect match! Most breeders ship their pups out and that’s that, but Sherry cares about all her pup’s years after sending them off. SwissRidge pups can’t be compared; they are loving, loyal, intelligent, adorable, and everything one could ask for. It sounds cheesy, but it’s true! I guess you’d have to have one to know.” ~Ginia Chang

“Duke attracts attention everywhere we go. We are often stopped in the street and asked what kind of dog he is, and where we got him. He gets along well with dogs of all sizes as well as cats and I think Sherry’s temperament test of him proved to be 100% accurate. He is a middle of the road type of dog who loves adventures but also loves to snuggle up on the couch. He has never been overly excited or high strung, and has a nice even temperament.

Potty training was a breeze and we had very few accidents. He was such an easy puppy, and while I thought we got lucky, I think the credit needs to go to Sherry and the amazing dogs she breeds. He absolutely loves the snow in the winter and prefers cooler weather. However, he knows how to enjoy summer too and with some gentle coaxing he has become quite a water dog. He needs to be where the action is, and if we get up, he is usually close behind.

Even at a young age he has been very calm with children, although he can become frightened if unknown children are running at him screaming. He will follow around our two-year-old niece and is very gentle with her. He can be unsure of new people, especially when they are very loud or come towards him unexpectedly. But if people ignore him, he is ready to be their best friend.

Duke weighs roughly 65 pounds and stands about 27 inches at the shoulder. I would say he has more of a Poodle build and is long and lean. He has a wavy coat with the softest fur on the top of his head.

Mellonie and Sherry have been great, answering all of the many questions I had. This SwissRidge family is such an amazing pack to be a part of; there is so much support and knowledge to be shared. We absolutely adore Duke, as does everyone he meets. He loves life, and has brought us so much joy.” ~Stephanie Anstey 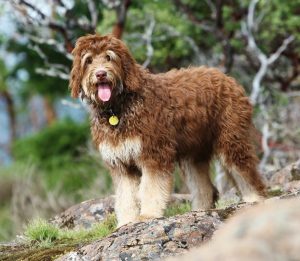 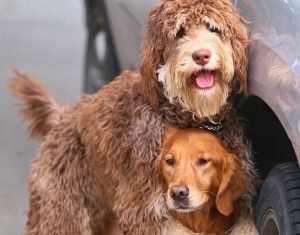 “Kaya is a female from the very first litter of Golden Mountain Doodles. She is our fifth dog – three of the four previous were Golden Retrievers. We were looking for the Golden personality without shedding. We got much more than that!

Kaya is a ball of positive energy, extremely intelligent, and easy to train. She interacts perfectly with other dogs. We put her in environments where she has the opportunity to meet other dogs frequently and she has never had any negative interactions. She seems to know how to appropriately approach or avoid other dogs. We were looking for an independent personality and she is perfect. I’m not sure how Sherry does it – but she picked the perfect dog for us.” ~Lynn Shaw

Lula is a service dog SwissRidge trained for an adorable little boy named Emi. This is what Lula’s family says about her “One year ago this sweet girl arrived into Emi’s life and she has been a true blessing. She arrived just a few weeks before the lockdown and everything was closing, we had to stop all therapies that my son was doing and we were concerned of having some regression as we saw in some other cases.

Last week he was evaluated and they are surprised of how he has progressed even with all the things that we had to stop. During this pandemic he has had the best companion with Lula as his service dog.

Pictures are not enough to show all of what I would like to, but no doubt he has the perfect reading buddy, a friend to play with, a companion to go for walks or to hug when he feels anxious, a classmate for the virtual leaning, a weighted blanket to sleep with and many other things.

Thank you Lucas, Sherry and Karley, you are really chasing the life of this little boy!” ~ Rosa Marie Valdes Veramendi 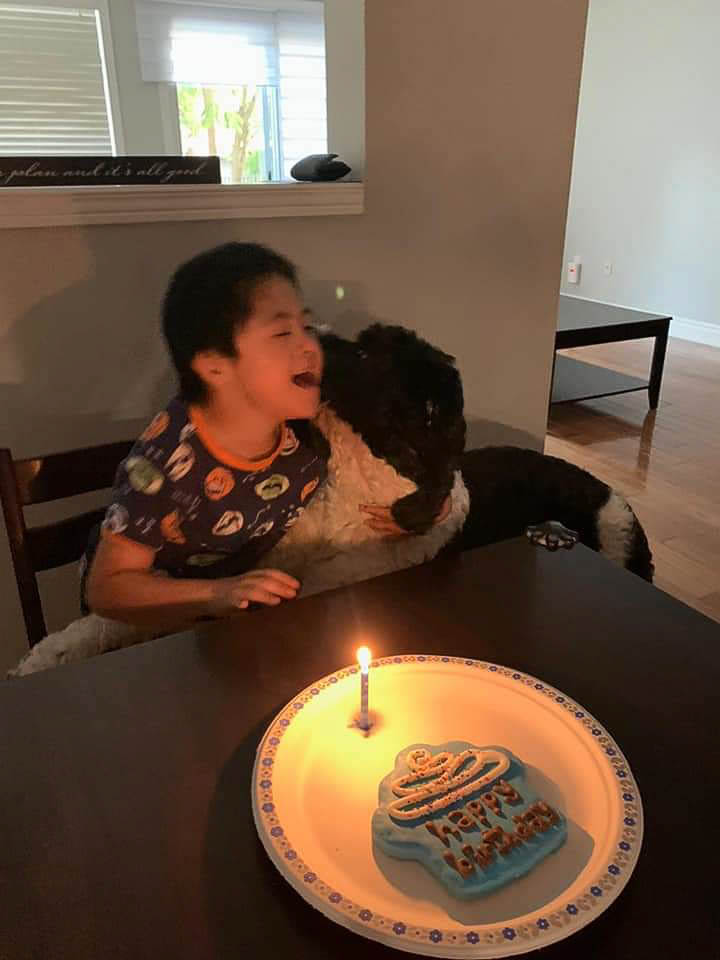